“The Ruy Lopez is such a classic opening that never gets old. Regardless of what you already knew about this opening, there are always new ideas to be found and tested over the board. That is why this book is beneficial to chess players and enthusiasts at all levels, including top Grand Masters like myself. Reading the first volume of this book has been inspiring, as I feel that I have broadened my chess knowledge in certain variations. I am eagerly waiting to try Dariusz’s solid recommendations in my future games, and I look forward to the second volume of his series. Overall, I highly recommend this book to anyone interested in the Ruy Lopez.” ~ Le Quang Liem 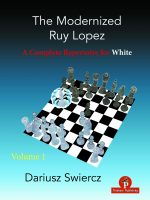 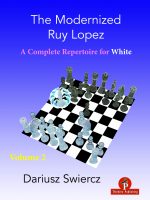 When I decided to write a book on the Ruy Lopez, covering a entire repertoire for White, I initially did not realize the volume of work that lay ahead of me. I have played the Ruy Lopez for many years with both colors and believed that I have good knowledge about this opening. I thought that armed with my knowledge I could easily write a book about it. Nothing could be further from the truth! While writing this book, I discovered that the number of resources and lines that Black has here is astonishing. To provide very good material that would satisfy not only the reader, but also myself, I decided to cover the entire opening in two volumes.

The first volume includes three parts. The first part is about Black’s alternatives to the modern major lines. Even though they are not as frequent as lines that I cover in subsequent chapters or volumes, I believe that it is good to know what to do in less popular variations too. After all, why would we study only (say) the Berlin Defense, leaving our opponents able to surprise us with the sharp Schliemann Variation? From a practical point of view, such a line would be very hard to face over the board from both chess and psychological perspectives. Basic knowledge of sidelines is therefore important.

The second part I devote to the extremely solid Berlin Defense. The amount of theory in this opening has grown exponentially in recent years, as basically all the top players go for it with at least one color. I will try to shed some light on this complex line and try to show different ways in which White can try to get an advantage out of the opening.

Finally, in the third part I discuss the Open Ruy Lopez. Similarly to the Berlin, the theory has developed immensely here in recent years. I will try to show some interesting lines and ideas that challenge this opening.

I would like to note one thing. Chess is a game where, with perfect play, Black should be always able to equalize. However, equal positions do not mean that the game should end in a draw. In many lines (especially in the Berlin), the positions are simply equal if Black does everything correctly. There is no way to prevent that. However, I aim to show lines that can possibly create practical problems for your opponents. Very often the objective evaluation does not really matter if a player knows what he or she is doing while his or her opponent does not. Having a clear idea about the plans and where to put one’s pieces, as well as a general “feeling” for the position, is way better than knowing that 0.23 is shown by an engine and not having any idea what to do next. And this is the primary goal of this book – to provide to the reader various ideas in the Ruy Lopez that could be used to the reader’s advantage in practical games. This would increase the chances of opponents making mistakes (by driving them out of their comfort zone) and therefore also your winning chances.

As I said in the introduction to the first volume, I had no idea what I was signing up for when deciding to write a book on Ruy Lopez. This opening has such a rich history and good reputation that proving advantages in many lines is nearly impossible. Writing the first volume on this opening was a Herculean effort and I thought “it cannot be more difficult”. After all, I was covering such solid variations as the Berlin and the Open Spanish. Well, I got surprised again! I am not exaggerating when I say that writing the second volume was at least as hard as writing the first one.

In the subsequent part I discuss the Closed Ruy Lopez. It is easily one of the most popular openings throughout the history of chess with many games occuring as early as the 1800s. I suggest going for 9.h3 which usually leads to a positional battle. I present new trends and find new paths and ideas in such evergreen variations as the Zaitsev, Breyer, Chigorin and others. Additionally, I attempt to crack the Marshall Attack by suggesting the Anti-Marshall lines with 8.a4. I must admit that I thought that it would be a pretty easy task to analyze those openings having some prior analysis and experience with both colors. However, time after time I was encountering new challenges and new ideas from both sides that I had to resolve. My conclusions, based on careful analysis with the most powerful engines currently available is presented in this book.

This book completes my series on the Ruy Lopez.

I would like to take a moment and recall what I said in the introduction to the first volume. When both sides play very good and sound chess, it is normal that games end in a draw. It is especially true for such sound openings as Ruy Lopez. I do not attempt to dismiss one line or another because somewhere with best play Black can make a draw by force on move number 30, playing sometimes ridiculous moves that are only found during the analytical work. Over the board the reality is way different – practical aspect plays an important role in chess. Some positions are easier to play, some harder. Similarly to what I did in the first volume, I try to offer the most playable positions. I do not mind if the positions are equal, provided it is easier to paly with White or the chance of an error by Black is quite large. Sometimes I go into forced variations (e.g. in Moller Defense or Archangelsk Defense), sometimes into more positional battles (like in the Zaitsev) but I truly believe that the positions I aim to reach have potential and are tricky for Black. With proper knowledge I think White can put pressure on Black in the Ruy Lopez.

I hope that you will find my approach to tackling the Ruy Lopez interesting. I am aware that there is only so much I can analyze and someone may say that I did not analyze some positions deeply enough but that is the nature of chess – possibilities are pretty much unlimited and there will always be theoretical debate!

Finally, I wish you, dear Reader, good luck and I hope you can successfully use the ideas that I present in this book in your games.