“But I am writing for an audience that, by and large, is not interested in chess as a memory contest. So I’m not going to offer you lots of novelties and dense variation trees. On the contrary. The approach is to take the reader into the seemingly impenetrable labyrinth of variations without flinching, but then to base my comments on plans and concepts instead of computer analysis.” ~ Herman Grooten 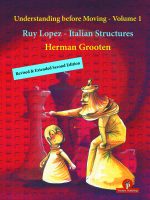 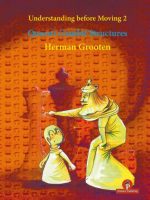 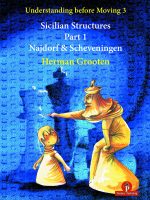 1 × Understanding before Moving 3.1: Sicilian Structures - The Najdorf and Scheveningen 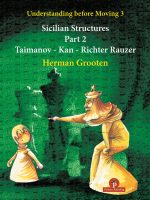 In my view the average club player will be more pleased with an opening book in which a profusion of ideas is offered. If this is also structured, you can hope that the readers will acquire the necessary understanding of standard positions. On the basis of this guideline, developing an opening repertoire could easily turn into a pleasant pastime. Together with my Belgian chess pal Daniel Vanheirzeele, the owner of Thinkers Publishing, I have been enabled to discuss the backgrounds of openings in a much more detailed manner, something I couldn’t do in my article series because of the lack of space.

After the first two volumes of the series had been produced (the first about Ruy Lopez and Italian structures after 1.e4 e5, the second about Queen’s Gambit structures after 1.d4 d5), it was time for me to consider the third volume. Since the Sicilian is such a popular opening among club players, the choice was virtually automatic and resulted in the book you now hold. It was, however, clear from early on that such a nuanced and wide-ranging opening could never fit in a single volume. That is why the series will continue with more Sicilian books after this one. As my former teacher, the late Huub van Dongen, once said: “There is more literature about the Najdorf variation alone than about the Middle Ages!” And, you know, maybe he’s right. The complexities of the Sicilian are such that it is quite the job to explain them in the style I established with the first two volumes on more classical openings. Each Sicilian variation has quite specific characteristics and deserves separate treatment. But in placing the systems in books I tried to group together those that are most similar to each other. Hence, the Dragon does not go with the Sveshnikov; in the present book you will find the Najdorf and Scheveningen variations, which are altogether more similar to each other and even have some overlap. But before we go any further we should unpack a small question: why play any Sicilian at all?

As covered in the 1st volume of Understanding Before Moving, there is nothing wrong with 1.e4 e5. This is still the case today. But it seems strong players who are playing against lower-rated players with Black sometimes find it difficult to create enough winning chances there if White isn’t so inclined. Hence many players play the Sicilian alongside their main choice: sometimes a sharp fight is what is needed!

The second question I should answer first is how the aforementioned Sicilian lines (Najdorf and Scheveningen) , which have been in the repertoires of practically all world champions, could be meaningfully presented for the club-player audience. This is done according to the concept of this series: facilitating an understanding of the typical manoeuvres and common strategic or tactical concepts of the opening. These will be presented in a structured way using annotated games in the different lines in the Najdorf and Scheveningen. Each line (essentially, each White 6th move in the two variations) gets an extensive intro and a selection of entire games. This is a conscious decision: experience shows that players who have entire games in mind (including even the deep endgame) have a better idea of how to gain opening advantages and – having got them – how they can be converted into victories.

Remember what I said about the Sicilian not fitting in one book? Well, if I were to be exhaustive about it, neither would the Najdorf. My chess library has two booksone of which is thick- about the Polugaevsky variation of the Najdorf. I played this a fair bit when I was around 20 years old: the variation tree is dense and extremely hard to memorise, yet memorise it you must since strategy plays a limited role here.

But I am writing for an audience that, by and large, is not interested in chess as a memory contest. So I’m not going to offer you lots of novelties and dense variation trees. On the contrary. The approach is to take the reader into the seemingly impenetrable labyrinth of variations without flinching, but then to base my comments on plans and concepts instead of computer analysis. (This means that verbal comments dominate.) The examples need to be clear enough and leave enough impression on your mind that, no matter how complicated the game becomes, you can
adapt that which you have already learned to the new situation. Even with this hyper-sharp opening, the understanding of strategic basics is of tremendous importance. Supported by these, you stand a better chance of navigating the variation tree. Of course some variations will be indispensable, but I will try and use them to illustrate my point, rather than them being the point. The better your insight into the position, the less dependent you become on specific move-sequences anyway.

It is always proper to give acknowledgement to the people whose support has helped with your work. I would like to thank the English grandmaster Daniel Fernandez for his work on this book. He was involved in the English translation; and also, being a connoisseur of the Sicilian himself he was able to give useful advice on a number of points.

The first volume dealt with the Najdorf and Scheveningen variations, and it is now time to pay attention to three other extremely popular systems: the Taimanov, Kan and Richter-Rauzer variations. After careful consideration within the Thinkers Publishing team, we decided that it made sense to group these variations together. In particular, the first two are closely related and share the feature that, in both cases, Black plays …e7-e6 and …a7-a6 at an early stage. They typically have the idea of retaining more options for their king’s bishop by postponing …d7-d6 (or even omitting it entirely.) The bishop may go to b4 or c5 in different lines.

There are no reviews yet.